BABA, the British Artist Blacksmiths Association, was formed in 1978, and has organised a number of international blacksmithing events. Three of the outstanding sculptural works that resulted from these can be seen in the images below. All events involved the participation and work of blacksmiths from many countries. ASG and BABA, with the support of other blacksmiths’ associations worldwide, are organising and delivering the Poppy Cenotaph. 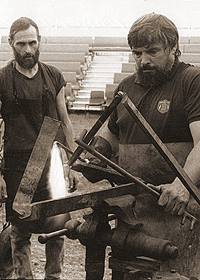 First International Festival of Iron held in the centre of The City of Cardiff, Wales in 1989. 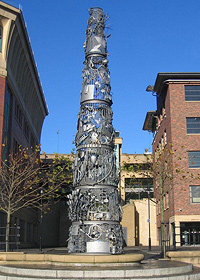 The Blacksmiths Needle built in 6 sections at 6 different blacksmiths’ events and now sited in the City of Newcastle-upon-Tyne.

The Pillar of Friendship 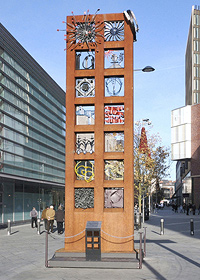 The Pillar of Friendship built at the International Blacksmiths Event in Ironbridge in 2007. This artwork was installed in the City of Liverpool in 2008 as the centrepiece for Liverpool’s celebrations as the European City of Culture. It is currently on display at its place of origin, Ironbridge, Shropshire, the birthplace of the industrial revolution.

Two further significant international blacksmithing projects organised by BABA in association with other blacksmithing organisations were: 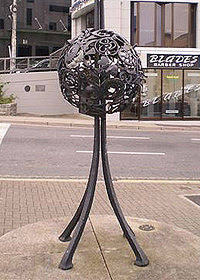 The Blacksmiths Ball, organised by BABA and Joe Bonnar Engineering. Built in the town square of Letterkenny in Ireland in 1992 and now installed outside the Letterkenny Courthouse.

The Hive of Knowledge

The Hive of Knowledge, organised by the Irish Artist Blacksmiths Association (IABA) with support from BABA. Built in the centre of Monaghan, Ireland in 2011 and now installed outside the Monaghan Courthouse.