William and Sera Thomas were married in 1885 and were determined to make a good future for themselves and their family.

They stretched themselves financially by buying Nant Gwynau Farm near the village of Llansawel in Carmarthenshire, Wales and had to work from dawn to dusk to make ends meet. They eventually had six children which increased the workforce but also the number of mouths to be fed.

My father Jack was their third son who could be relied upon to be up in time to help with the milking and still be ready to walk the three miles to the village school, singing as he went. When I was a child he would tell me of the delight of having two eggs for breakfast on his birthday. He would eat his very slowly just to make his siblings jealous! END_OF_DOCUMENT_TOKEN_TO_BE_REPLACED

A young soldier’s miraculous survival after being gassed.

Information collated from his personal War Diary July 1915 – November 1915. His personal footnotes and from his son and daughter – my uncle and aunt.

My Grandfather, Arthur Dawson’s story epitomises a young man’s courage and fortune in surviving the horrors of WW1. His unedited war diary exists to provide a description of his experiences:

Arthur was 15 years old when he ran away from an unhappy home life to enlist, having been falsely told that his mother was dead: claiming that he was 19 years of age and that he had received Notice.

Arriving in La Havre aged 16, passing through Rouen, his first destination was a village called Talmas where his Battalion discovered a nunnery where the Germans had murdered all of the nuns.  He was required to do 24 hour guard, with the sound of Artillery fire throughout the night. The soldiers kept themselves well supplied with fruit from deserted orchards. Church services were attended. They engaged in Parades with ‘smart turn out ‘and sports of all kinds and ‘grub’ was ‘absolutely it’. London papers occasionally reached them. They were paid in paper money which they had trouble changing. END_OF_DOCUMENT_TOKEN_TO_BE_REPLACED

In 1924 they later changed their name to their mother’s family name of Penderel.

Dougles Jones the eldest of three brothers from Pontardawe

At the outbreak of war in August 1914, three brothers from Wales volunteered to join the British army. Amazingly, when the war was over, they all returned to their home, decidedly battered and scarred, but alive!

The eldest, Douglas, (1887-1963) unlike his younger brothers, was a committed pacifist, but on 4th September 1914, aged 27, he enlisted and joined the Royal Army Medical Corps as a private, although by the end of the war had been promoted to temporary Sergeant Major. For over three years, Douglas was attached to the London Field Ambulance 56th Division, evacuating wounded and dying soldiers from the battlefields, mainly at Ypres and Paschendale, to casualty field stations. The horses were his particular responsibility as the field ambulances were horse driven. He was ‘mentioned in dispatches’ and awarded the Meritorious Service Medal. 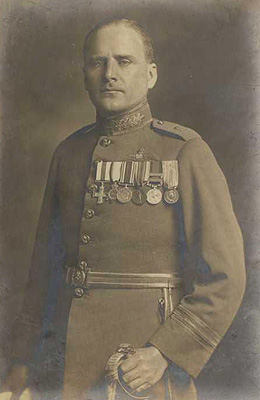 The next brother, Godfrey (1890-1943) joined the Welsh Regiment and fought in the battle of Sulva Bay, Gallipoli in 1915. He was wounded in the battle and hospitalised in London. He then learnt to fly, joined the Royal Flying Corps and in July 1916 was a fully fledged flying officer. He was soon in action but was twice wounded winning the Military Cross and the Italian medal for ‘military valour’. The citation in the London Gazette of March 1917 stated that ‘he received his M.C. in recognition of conspicuous gallantry in action. With a patrol of three scouts he attacked a hostile formation of ten enemy machines. Although wounded, he continued the combat and drove down an enemy machine. Later, although again wounded, he remained with his patrol until the enemy retired.’

Godfrey survived WWI, but remained in the RAF as it was called after the war. His obsession with flying and speed remained, competing in the King’s cup race of 1925 where he was reported to have made the fastest time but came second, owing to the handicap system. Although still in the RAF, he continued to race aeroplanes, cars and motorbikes. He also bob-sleighed for the British team in Moritz!

He was in command of the first flight from Cairo to the Cape of Good Hope and was, based at Helopolis. The RAF were an important presence in Egypt, ostensibly to map the desert, but also for strategic military purposes. When in 1932, Godfrey joined the expedition, which successfully found the ‘Lost Oasis of Zerzura’ in the Libyan desert, his experience was invaluable. This expedition was led by Count Almasy, the central character of the 1982 film ‘The English Patient’, based on the Libyan expedition. Godfrey was depicted as Madox.

In WW2, Godfrey Penderel was a test pilot.  He was killed in 1943, whilst on a secret flight in a Hurricane HV895 over Orfordness, Suffolk. He was 52. 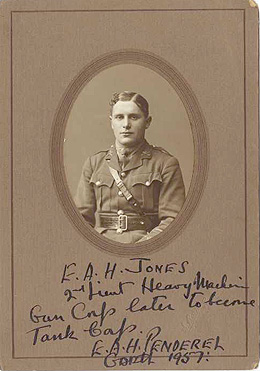 The youngest brother was Harold (1896-1967). In August 1914, declaring his age as 19, when he was still 18, signed up for the 21st Battalion, Royal Fusiliers, as a private. Eventually, on November 15th 1915, he went with the brigade to France and in January 1916 was gazetted 2nd Lieutenant in the newly formed Tank Corps. At the age of twenty, he was commander of a seven man crew and two years later was in the Somme as Captain in the battle of Cambrai where, according to a telegram from the War Office, he was ‘wounded in the head by flying shrapnel’.  Although Harold returned home for a short time, he was back in France when the armistice was signed. He remained in the army until 1922, then returned to Wales.

Ypres in ruins taken by Dougles Jones and Harold Jones (on right in front of his tank).

Godfrey Jones with The Royal Flying Corps c. 1917 and Officers accommodation behind the trenches in the Somme.

A selection of items relating to the Jones brothers can be viewed at Casgliad y Werin / People’s Collection Wales. 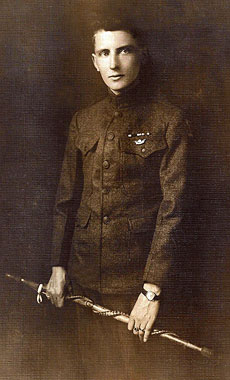 He received a Congressional Medal of Honor in 1919 for his service behind enemy lines.

“My grandfather lost his hearing from shell shock in France during the war in 1917/18 — he was an infantry messenger delivering notes behind enemy lines. He never learned sign language, so we always communicated by writing words in the palm of our hands. He became a sign painter and cartoonist for a living and on the side, trained and raced greyhounds — I still have his twin-collar, dog release/leash and treasure his paint box and brushes to this day.  It would be an honor to work on this project in some capacity in recognition of his sacrifice and for that of many others who never made it home.”

First allied airmen to be shot down

2nd Lt Vincent WATERFALL and Lt Charles George Gordon BAYLY, 5 Sqn RFC, took off on 22 August 1914 and at around 10:50 the pair was over German marching troops in the Enghien-Soignies area (south-west of Brussels).

Their plane (an Avro 504) was hit by enemy ground fire and crashed by the side of the Ath-Enghien road, both occupants being killed. They were the first allied airmen to be shot down and killed in Belgium. Their grave can be found in the cimetière du sud in Tournai.

The burnt remains of the aircraft and occupants 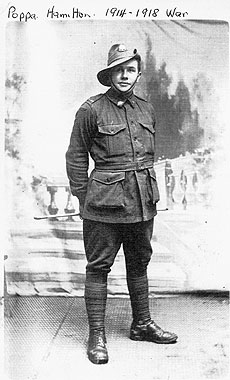 Poppa, my great grandfather fought in WW1. He was a dairy farmer and enlisted as an infantry man at the age of 17 (declared age of 19) in the Australian 34th Battalion. These fellas travelled on steam ships for a month and a half to England for training before coming over to France to enjoy the terrible winter of 1916-17 and fighting on the Western front including the Ypres sector of Belgium. Luckily for me he survived these years. After the war was over he met Nana (my great grandmother) in England got married and eventually returned to Australia. During the journey home the men and women travelled in different areas of the ship newly married couples included. Upon their return Poppa again took up dairy farming and started a family.

Story submitted by Will Maguire