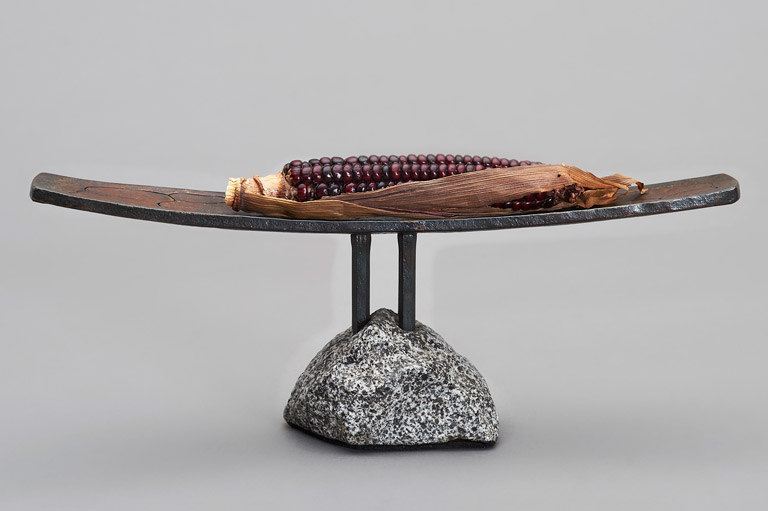 The accompanying photographs document a few pieces of an ongoing series of small works concerning transition / transformation. I propose to complete a new work in 2016 specifically for the show that builds on the materials, processes, and concepts demonstrated in the work included in the photographs.

These pieces are the result of an ongoing study of the transformation undergone in both metals and igneous rocks both upon crystallization and phase change. Geologic metamorphism has analogs in metallurgical processes, as well as being rich in metaphorical potential. These small pieces (approximately 14 x 40 x 12 centimeters) are collectively referred to as “plutonic plates”, alluding to plutonic rock formation. The metalwork is produced entirely from wrought iron dating from 1913, salvaged from a bridge built in that year near my home in Montana. The pattern in the plate is the result of forge welding numerous round plugs of wrought iron to a base plate, and subsequently forging the plate until the boundaries of the growing “crystals” meet. Further manipulation of the plate creates emphasis of these organically formed boundaries. Four legs are silver brazed to the bottom of the plate, and then the completed form is pressed into a white hot piece of granite, that, upon cooling, provides the base.

The relationship between the crystal pattern in the plate itself and that of the actual grain in the granite is of course quite intentional. The base rock has undergone a metamorphosis from its heating and the penetration of the legs of the plate, and the legs themselves are polygonal in cross section, suggestive of the columnar forms often found in basalt.

This work attempts to integrate a passionate ongoing interest in fundamental forging process, the idea of both material and personal transformation, and my continuing work in “forging” certain igneous rocks. What I believe ties this work to the broad intent of the show in Ypres is its focus on the intensity of process required for full transformation. As well, the main material, the iron, itself dates precisely from the beginning of the First World War. It is quite literally a relic from that time a hundred years ago when the exuberance of the Industrial Revolution was at its height.

The scale of this work is quite practical for transport. Although I may decide to enlarge the scale, the weight of the piece would not exceed 10 kilograms.