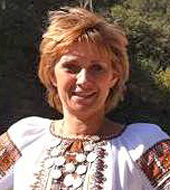 Olga is a teacher of English, and part of ‘ARMA”, the family business, with herblacksmith husband, Sergiy Polubotko, a demonstrator and participant at several blacksmith festivals in Ukraine. He has also demonstrated in France, Belgium, Lithuania, Austria , Poland, Italy and Australia; in the USA, twice at ABANA Conferences, and at the CBA; twice in Britain at BABA Conferences; and as a participant at many others. He was the first president of the Union of Artist Blacksmiths Masters of Ukraine, and the initiator of many blacksmithing events there.

Together with other people – friends and colleagues – they initiated the International Blacksmith Festival “Sviato Kovaliv” in their native city. This year it will be the 13th festival and the 14th Blacksmithing exhibition. She has been involved in volunteering work during the festivals, organising accommodation, travel, the work of international delegations at the festival, and organising student volunteers and interpreters to help the delegations. Following the festivals, she has organised excursions for participants to many interesting places.

She has written articles for international magazines – Hephaistos, Anvil’s Ring, Hammer’s Blow, Ukrainian magazines – to publicise their festival. She was a guest-editor of Artist Blacksmith, the British blacksmithing magazine, and co-ordinated the Ukranian response to the Australian, Memorial Tree Project.