A huge international gathering of blacksmiths took place from 1st September to 6th September 2016 in Ypres.

Forging stations, tools and equipment and all of the infrastructure requirements of such an event, were set up in the Grote Markt (the market square) in the centre of the city during the two days before the start of the event. 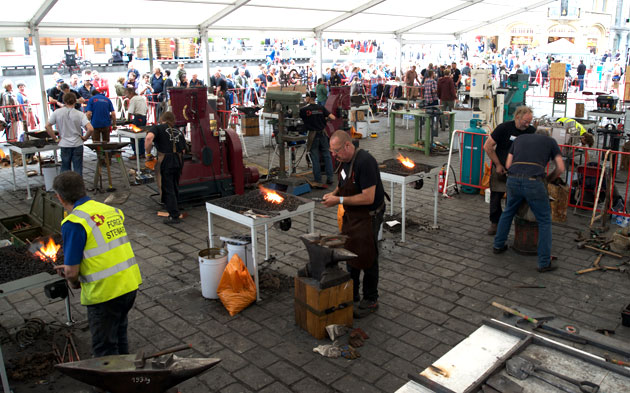 The Poppy Cenotaph plate was supplied by Sigma, a German steel company and the fabrication of the plate was carried out by LVD, a Belgian engineering company. The cenotaph plate was erected temporarily at The Grote Markt during the course of the event on a substantial base constructed by Geldof an other Belgian engineering company. The supporting base was overlaid with eight concrete sections, complete with drilled holes, ready to receive the 2016 poppies during the event in the Grote Markt. Many of these poppies were produced by blacksmiths from around the world in their own workshops during 2015 and 2016, with the balance being made in public at the event. 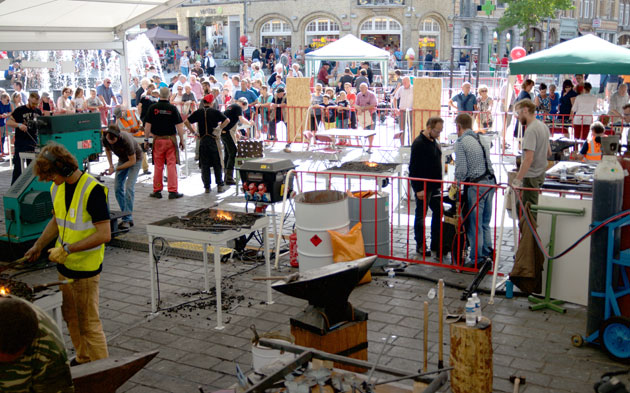 When the cenotaph was transferred to its permanent site in Langemark-Poelkapelle, the poppy field was installed in a concrete mound around its base. This has been bordered by an arrangement of 26 low railing panels in two different sizes, laid out to represent the characteristic meandering form of the trenches.

Thirteen Master Blacksmiths were invited from around the world to design the 13 larger, of 25 railing panels. A ‘masterclass’ format was used, in which master blacksmiths each worked with a team of 6 volunteer blacksmiths to make their individual panels. This approach was used in the making of The Pillar of Friendship in 2007 at Ironbridge, UK. A design competition for the remaining 12 smaller, railing panels was opened to the international community of blacksmiths and designers. The winning competition railing panels were made alongside the 13 invited designs using the same masterclass format. 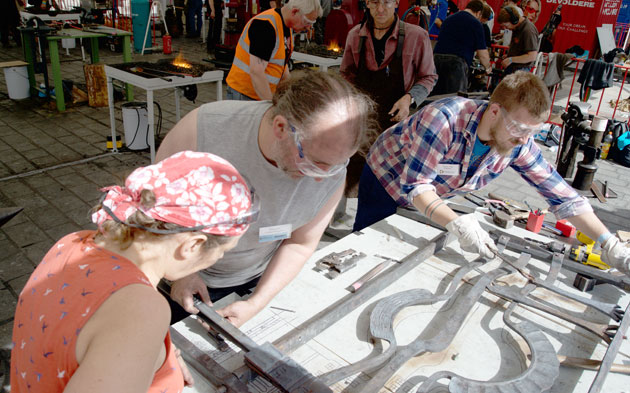 Twenty-five railing panel outer frames were delivered to the market square and thanks to the commitment and strenuous efforts of the several hundred smiths involved, all 25 panels were completed during the 6 day event and fitted into the frames. Alongside this, many more of the 2016 poppies were forged by delegates to the event. Children were encouraged to try their hand at forging in a dedicated forging area. Specialist blacksmith instructors were present to assist with this learning experience.