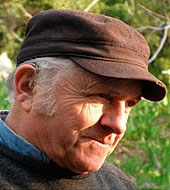 He lives and works in Chile, in his workshop – a quarry in San Juan de Pirque, at the foot of the Central Andes of Chile. His sculptural practice has as its main objective, the production of large works for public spaces. To achieve this, he built the large workshop where he creates sculptures and deploys them to various cities in Chile and across the world to England, Holland, Croatia, Slovenia, Argentina, Sweden, Bolivia, Costa Rica, Canada, Lebanon, Mexico.

He is the author of more than 50 monumental sculptures, built especially for specific locations in different cities. With a world-wide presence, he is considered to be one of the leading figures providing art in public spaces.

A third of his monumental sculptures are in various countries outside Chile, acting as a permanent ambassador for Chilean culture abroad. His last Grand Walkable sculpture “Bridge of Light” 100m long, has become an icon of the city of Toronto. All his sculptures are devoted to investigating the ability of matter – mastered in the handling of forged steel, wood and stone – to provide the fundamental words of a sculptural language.