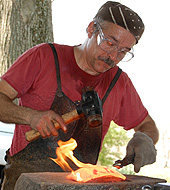 Jeffrey’s fascination for iron began in his youth clamoring over the stone and iron remains of the early American milling industry along the streams where he grew up in the Eastern United States. Upon learning in his teens that iron could be shaped hot, he promptly began exploring blacksmithing, soon moving to Montana to pursue the craft in a wilder and more mountainous setting. Opportunities for formal instruction were few at that time, so he chose the path of continuous experimentation to build a shop and repertoire of techniques. Those ongoing explorations continue to characterize his work.

Over his career he has focused mostly on forged architectural metalwork and public sculpture. However, work in stone, especially hot working of igneous rocks has been a persistent passion. At present he is balancing interest in developing the work with hot stone with building a business focused on making agricultural tools. The very pure experience of forging tools is seductive, and the integration of function with beauty presents a satisfying challenge. As well, the production of utilitarian tools is more consistent with his evolving economic philosophy.

Since 1985, concurrent to the production of metalwork and public sculpture Jeffrey has demonstrated widely around the United States at blacksmithing conferences, as well as taught regularly at various craft schools. He is very committed keeping the forging of iron a vital craft into the future. Indeed, he believes we will see it become a more deeply appreciated and essential craft in the coming century.

Jeffrey’s work can be found in various public and private settings across the United States. Increasingly it will be found in the hands of small farmers committed to sustainable agriculture, along with other craftsmen.

Jeffrey’s grandfather served the US in World War I and left a treasure trove of letters documenting his experiences in Europe and Russia. Those will inform the project in Ypres.