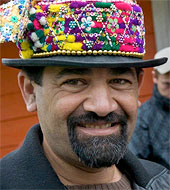 Kheir Aker is a Palestinian blacksmith and has run his own workshop since 1997. He is married with five children and originally studied to be a metalworker from twelfth grade. From 1983 to 1988 he studied sculpture and painting. He spent 12 years working as a metalworker in a factory before staring his own workshop in 1997. To date Kheir has participated in no less than 22 International conferences throughout Europe. In 1997 he was an invited master at the Pillar of Friendship conference in Ironbridge, England and in the same year he won first prize at Stia, Italy. Kheir has recently completed a three meter high sculpture for Helfstyn Castle in Czech Republic.