Langemark-Poelkapelle is a rural twin community in and on the edge of the Ypres Salient. It’s known for its folkloric figures, its countryside, but not in the least, as a community that was badly scarred by the First World War. Langemark-Poelkapelle is known as the place were they used gas for the first time, where the 3rd Battle of Ypres took place and where the renowned French Pilot, Guynemer fought his last battle. 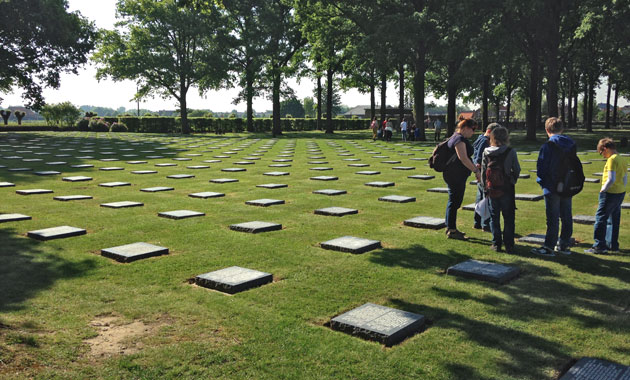 On the territory of Langemark-Poelkapelle, there were more than 40 German cemeteries. One of them was “Langemarck-Nord” or “Nr 123” at the Klerkenstraat. This cemetery was founded by a British Regiment, in October 1914. After the first gas attack on the 22nd of April (during the Second Battle by Ypres) the cemetery was located in German territory until the summer of 1917. Half a year later, in April 1918 (during the 4th Battle of Ypres) the Germans recaptured Langemark. 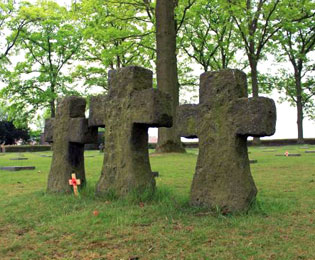 During the war, the amount of casualties rose almost every day. At the end of the War, there were 859 graves of German, British, French and Belgian soldiers; 627 of them were German. In the first years, after the war, the Belgian Association for Military Wargraves, took the initiative to erect this cemetery

The “Canadien”, as it is known in the region, is one of the most poignant statues in the whole Ypres Salient.

As said before, Langemark-Poelkapelle is the community where they used (chlorine) gas for the very first time in modern warfare. On April 22nd 1915, German soldiers released 150 tons of gas from 6000 cylinders. At the Brooding Soldier, the Canadians resisted the German attack. The Canadian Forces Memorial was erected in rememberance of the 2000 dead from the First Canadian Division. The soldier is looking at the area where the cloud of gas came from. Standing ‘Arms reversed’ he is giving a military salute to the fallen soldiers.

The victims of the gas attack aren’t buried in this memorial park. Literally, you are standing on Canadian ground, because the earth for this little park was imported from Canada. The monument dates from 1921 and was designed by F.C. Clemeshaw, who was also a Canadian soldier during World War 1.

The French aviator Georges Guynemer (1894 – 1917) belonged to the elite of the World War 1 pilots. After a difficult start, Guynemer strung one victory after the other. With the “Escadron des Cigognes” (squadron of the stork) he brought 53 opponents down. On 11 September 1917, he fought his last battle. He went missing; his body and his plane were never to be found again.

The monument erected on his behalf dominates the community of Poelkapelle. On top of the statue, you see a bronze stork flying to the place where Guynemer is believed to have crashed. A laurel decorates the statue.

The Poppy Cenotaph, which will be a strong symbol for peace,  will be placed nearby the entrance of the German Cemetery.  As Langemark-Poelkapelle, once the scene of the great war, is profiling itself as a peace village, therefore, we have a lot of symbols and events. Three times a year, the village organises peace conferences (see www.vredeswakes.be)

In the village, we have a monument placed by Harry Patch (eldest surviving soldier) in 2008, with the not to be misunderstood message : “always remember both sides of the line”. We will place a peace-signpost in March 2015.

So, placing a poppy cenotaph, a very British remembering symbol, nearby the German Cemetery will be another symbol of peace.  And a lot of tourists will be able to see and visit this cenotaph.  This year, 253.000 visitors went to visit the German Cemetery. After Tyne Cote Cemetery and In Flanders fields’ museum, the third most visited war relict in the Ypres Salient.